How much do you know about Oxford?

Oxford is undoubtedly one of the most famous places in the world, practically everyone has heard of its famous university… but how much do you actually know about this historic and fascinating city?

Teaching of some form has taken place in Oxford for almost a millennium, but the university really got started properly in 1167, when King Henry II of England banned students from attending the University of Paris. Out of the 30,000 people who apply for a place at Oxford each year, only 10% are actually accepted. The student body is divided almost equally between under-graduates and post-graduates. St. Hilda’s was the last Oxford college to become co-ed, finally opening its doors to men in 2008, 14 years after Somerville College did the same. 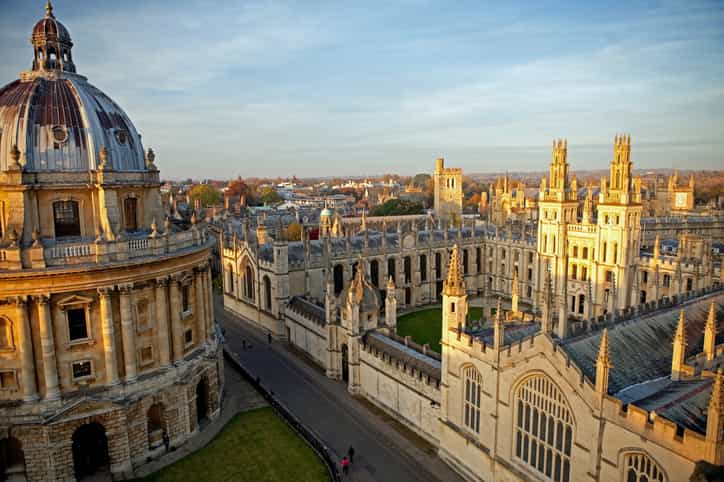 Oxford is much closer to the capital than people think - just 56 miles as the crow flies - and it takes just 1 hour and 20 minutes by train to reach Paddington Station, in the heart of London. But Oxford is also set in some of the most picturesque countryside in England. The Chilterns, south-east of Oxford, are part of a system of chalk hills that run through southern and eastern England. The Cotswolds, to the west of Oxford, feature steeper slopes and are of mainly limestone. Both are national Areas of Outstanding Natural Beauty and can be reached by car in around 30 minutes from Oxford.

Many people don’t realise that the river that runs through London also flows through Oxford. Although much narrower and more picturesque as it flows through Oxford, the Thames, called the Isis near its source, rises in the hills near Oxford. In summer, the pub gardens are packed with students and locals sipping gin and tonic or Pimm’s and lemonade in the sunshine as punters make their way along the river beside them.

Oxford has an incredibly rich literary history, The Lion, the Witch and the Wardrobe was written by C S Lewis and The Lord of the Rings was, of course, written by J R R Tolkien… both of whom also studied and taught at Oxford, along with Lewis Carroll, the author of Alice’s Adventures in Wonderland. Carroll studied and taught at Christ Church College for over 26 years.

Oxford is the 42nd largest city or town in the United Kingdom, with a population of 165,000.

Oxfordshire County Council, employing over 22,000 people, is the largest employer in the region. Oxford University is not far behind, with around 18,000 people working for the institution. BMW, with its huge Cowley plant in south-east Oxford, employs over 10,000 people, including technicians, salespeople and factory workers.

The word oxford, surprisingly, is allowed in the game of Scrabble as an adjective that describes things or people related or pertaining to the city or university of Oxford, as in ‘That’s such an oxford thing to do!’ or ‘She’s so oxford these days!’ It is a synonym for sophisticated or educated… but how many points would you get for it, counting tile value alone? The answer is 17.

So there you go, how did you do on our quiz, and more importantly, when are you coming to Oxford to find out more?

Santa Cruz de la Sierra is one of the fastest growing cities in the world.

The Next Petrostate: Guyana’s oil find will impact their real estate market

Guyana’s economy is set to have an explosive next decade.

The team at La Haus is aiming to do for South America what Zillow has done for the United States.