The Niseko Brief: How Niseko Became a Luxury Destination

With Niseko now boasting a robust summer tourist scene in addition to its main winter season, luxury developers are increasingly interested in becoming a part of the town’s future.

Using our exclusive in-house market research, developer surveys, and the Propeterra Hirafu Listings Database, in this article we will chart this once sleepy Hokkaido ski town’s transformation into an internationally renowned luxury destination.

Niseko, once only a winter escape, now welcomes tourists throughout the year. Indeed, current projections for 2019 predict that less than half of the Niseko’s annual tourists will visit in the peak winter months of December to March. Moreover, international tourists to the town have increased 177% from 2012 to 2019, with a 45% increase in the last two years. These tailwinds have caught the eye of luxury developers.

Fig 1: Foreign visitors to Niseko have grown nearly three fold since 2012, are are increasingly visiting in the summer. Use the “Country of Origin” filter for more granular insights.

With demand from both winter skiers and summer holidaymakers avoiding the sweltering humidity of Hong Kong and Singapore, developers have increased the pace and quality of their construction, in the knowledge that vacancies can be filled throughout the year. Data from an exclusive Propeterra survey conducted with one of Niseko’s leading property developers confirms that new construction is booming in the region. Since 2015, their construction expenditures in Niseko have more than doubled. Our research indicates that this is reflective of the general trend of the resort.

We have found this development to be increasingly aimed at a wealthier tourist demographic. Our research shows that the newest properties demand higher prices per square meter than older developments. On average, developments list for $572 less per square meter for each year older they are. It must be noted that this trend does not take into account differences in the locations of new and old properties. Many old buildings on premier land spots have been removed to make way for new luxury developments. In the next article, we will decouple the effects of age and location on price. Despite this, age alone remains a strong predictor of price, with 54.6 percent of the variation in price per square meter explained by the age of the building.

Although buildings—and therefore prices—do deteriorate over time, we believe Niseko’s trend to be driven by the improving standards of property development as a result of the resort’s shift to a wealthier visitor demographic. This is apparent when investigating the outliers in the data. The Alpen Ridge, constructed in 2009, demonstrates that older buildings can still demand a high price point. When the condominium building was constructed, it was the most luxurious in the resort. Today, it continues to demand prices over $15,000 per square meter, which exceeds the current price of all listed developments constructed until 2014, despite being 10 years old. The building remains able to demand such a high price point as degradation is not a major problem in Niseko, where initial build quality is high and maintenance is frequent.

The trend towards luxury is further confirmed by real estate images. The following photos were taken when the building was brand new, therefore the images give a comparison of the relative luxury of each building upon opening. The four pictures below, while only a sample, are indicative of the trends found throughout our analysis of real estate developments in the Propeterra Hirafu Listings Database. 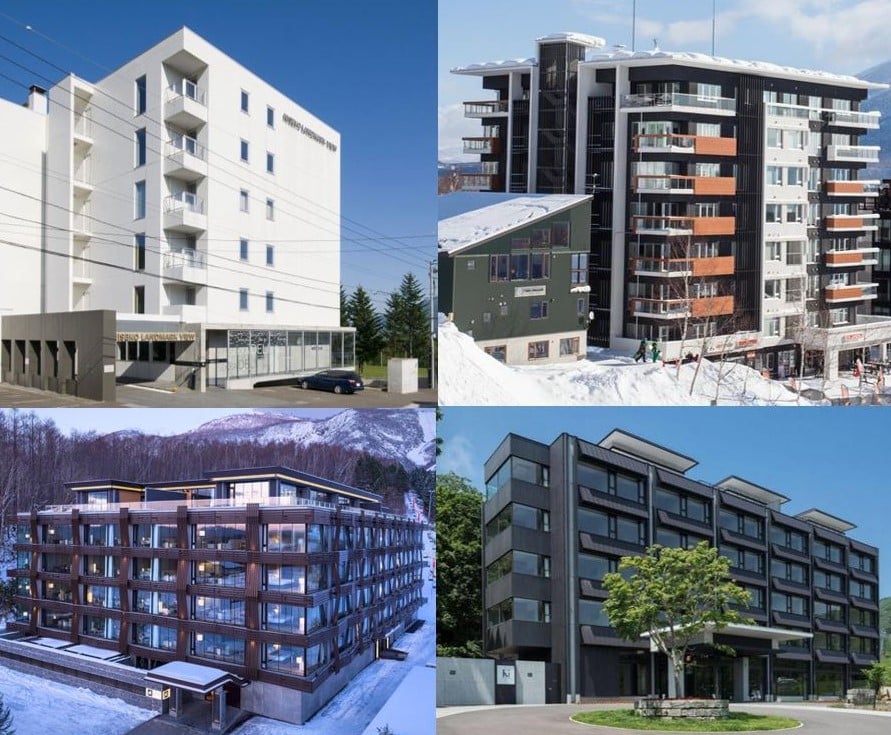 At left, the bland exterior of the 2006 Landmark View stands in stark contrast to the large windows and stylized façade of the 2016 Aya Niseko. Notably, while the Alpen Ridge photo below was taken soon after completion in 2009, recent images show that the color and quality of its exterior has not faded. This serves to reinforce our thesis that the increasing prices in Niseko are attributable to a shift in the resort’s target demographic, rather than the degradation of old buildings.

Once ahead of its time, many listings are now completed to a similar, if not higher, standard than the Alpen Ridge. Our market research has revealed that whilst buildings completed in the five years before Alpen Ridge list for an average of $7980 per square meter, buildings constructed since 2009 list for $13,400 per square meter. This is a price increase of 68 percent per square meter. Perhaps unfortunately for those who first discovered Niseko, it has evolved from a skiers’ secret to a renowned luxury destination.

Yet in this change, not all areas or property types have fared equally. Check back soon for the next installment of The Niseko Brief to hear which parts of the market have fared the best, and learn where the best growth opportunities remain.

Missed the last installment of The Niseko Brief ? Click here to read the previous article.