Sacramento, California has finally broken ground on a seismic urban development project that will change the very fabric of the city. The Railyards, a vast 244-acre plot just north of Sacramento’s trendy, bustling Midtown district is set to receive billions of dollars worth of investment in transforming this disused area into an extension of the city’s downtown area. The area is one of the first visible indications of the urban centre when visitors drive from the airport. The underutilised space once housed the vital trans-continental railway workshops and trainbuilding facilities that helped to develop the country through the East-West Coast connection. The Railyards however, are in need of significant capital investment, progressive development vision and consciousness of environmental sustainability to achieve its fullest potential. With the demand for more office space, affordable housing, retail space, entertainment venues and hospitality growing in Sacramento, the Railyards seem like a sensible solution.

After the space was sold by Union Pacific in 2006, the site has changed ownership a few times as a consequence of the 2008 global financial crisis. Finally, in 2010, the land was purchased by local development Downtown Railyard Ventures, a subsidiary of LDK Ventures, best known for their remarkable transformation of an ex-Air Force base into an attractive business park in under a decade. The $18 million investment bought the Railyard space complete with a spacious layout of historic, vaulted brick buildings that once housed repair shops and storage facilities and remain strong foundations for public buildings like concert venues, public markets or corporate office spaces. 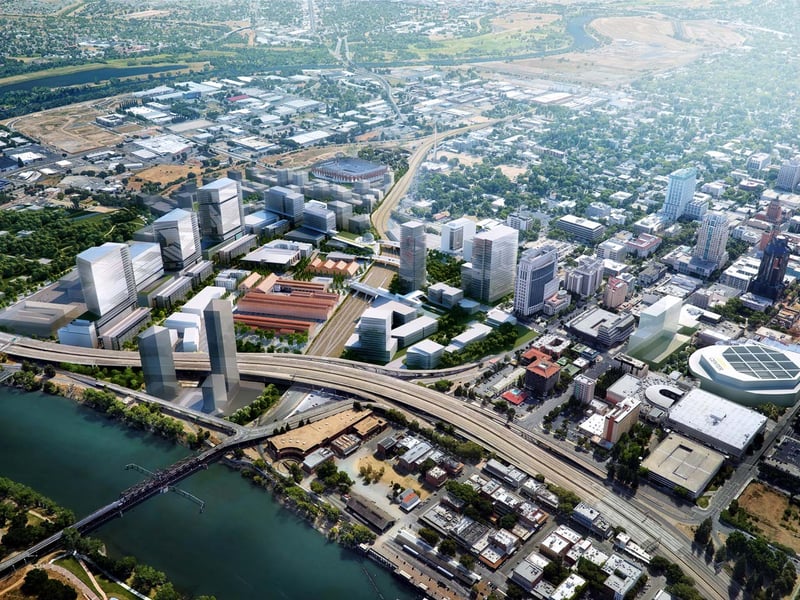 The Railyards potential has already seen investors flocking to take advantage of this prime commercial real estate. Kaiser Permanente, a US healthcare giant, bought 18 acres of the site for a future medical centre set to be complete sometime around the end of 2025. In the southwest corner, there are plans for a $490 million courthouse and a $250 million football stadium is already well underway. The Major League Soccer franchise, Republic F.C., is set to move into its new digs in 2022 with financial backing from Beverly Hills Billionaire Ron Burkle behind the capital investment. Having purchased 14 acres for the 20,000 seater stadium and the 17 acres surrounding it, the plan will see the state-of-the-art facility seamlessly integrated into the urban fabric of the surrounding area through a landscaped plaza, which leads into retail spaces and connects to the rest of the city through a light rail terminal.

The connection of the Railyard to the rest of the city is vital to its prosperity. The east edge of the development is 1 mile from the Golden 1 Centre, the high-tech NBA arena and home to the Sacramento Kings. The arena played a pivotal role in attracting hospitality and business to the Downtown Commons area in which it is situated, with the hope that the MLS stadium does the same for the Railyards. The west edge is flanked by the Sacramento River, which is under proposition for $47 million of city investment to create public parks, bars and entertainment venues.

The Railyards are 8 times larger than New York’s Hudson Yards which has proved to be a triumph of culture, commerce and cuisine. The potential for the Railyards in relation to the wider city of Sacramento far outstrips its East Coast counterpart’s potential to its respective city, making the Railyards a significant opportunity for the city. Mayor Darrell Steinberg is strongly on board with the project and sees public prosperity as well as glimmers of political favour in developing the Railyards. “The fact that major stakeholders are investing hundreds of millions of dollars in the Railyards tells the story”, says Mayor Steinberg with the potential for Sacramento’s future and capability to one day rival Los Angeles and San Francisco apparent.

The early traffic to the Railyards will be driven by the MLS stadium with retail, entertainment, business and hospitality following the demand. By building a modern multi-faceted facility adjacent to the existing downtown districts effectively extends the central area of the city. The clean-slate style of urban development presented by the Railyards offers near limitless potential. There are a few necessary factors that must be considered going forward with the urban planning. Firstly, although Sacramento’s affordability is significantly more than San Francisco or Los Angeles, Sacramento remains in a deficit of affordable housing, so plans are in place to rectify this deficit at the Railyards. Additionally, an initiative to attract new businesses is essential to populating Railyards with large corporate tenants. This may be a simple task. With San Francisco and Silicon Valley demanding astronomical rent prices, California-based technology companies are moving to alternative cities like Austin, Texas, Charlotte, Carolina and Portland, Oregon, but if Sacramento can offer high-end facilities, these companies could be persuaded to stay in California. It is the tech state of the US for a reason after all.

The future of the Railyards over the next decade looks bright with a few projects already close to completion to anchor the development to come. A city that is looking to ensure sustainability through walkable and cyclable streets with a vision of future urban sophistication in retail, hospitality and entertainment, the development offers potential for city-wide prosperity and significant investment returns on real estate. Mayor Steinberg aptly tells us that “we are taking advantage of a once-in-a-lifetime opportunity” to ensure a prosperous future for Sacramento.