Phoenix, Arizona has seen significant growth in the past 5 years thanks to a citywide initiative to reinvigorate and revitalise the city’s downtown. Considered by many within the city to be a seminal moment for the city, the development is reshaping the city’s skyline, garnering a great buzz from Phoenix locals and real estate investors alike. For most cities worldwide the downtown districts are the hub of working life, leisure and social activity, yet for Phoenix, this has not been the case for many decades. It is with this aim that Phoenix’s development initiative was enacted and now, a decade later, there are promising signs that Phoenix will not only achieve its target but exceed it.

The industrialised 1800s saw Phoenix become an invaluable mining centre for the US and played an important role in the development of the country as we know it today. The city’s location in the Sonoran Desert made it a thriving, urban trading, shopping, business and recreational hub right through until the 1960s. During this period, Downtown boomed but it all changed in the 1970s with the rise of the masterplan suburban communities and freeway infrastructure. Downtown suffered as a result, with Phoenix residents venturing into the city centre less frequently than ever. 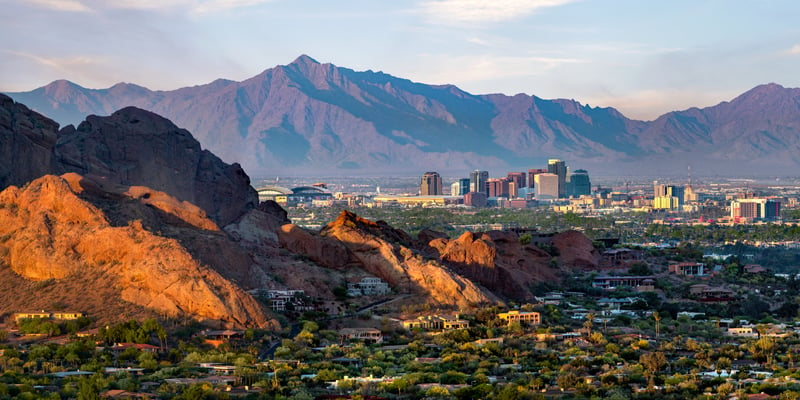 Since 2008, when the first phase of Phoenix’s light-rail network infrastructure was introduced and the University of Arizona opened its Downtown campus, the activity in Downtown has increased thanks to landmark projects that have drawn people back to the city centre. Since the launch of the Arizona State University Downtown campus, the student body of the university has risen by more than 12,000. Whilst the light-rail network has also been instrumental in connecting the two campuses, the appeal of a revitalised urban centre has definitely played a role in attracting more students to this great educational institution.

Since 2015 and especially within the last 2 years, more and more businesses have followed suit thanks to the investment from Arizona State University. Government, Technology, Hospitality, Insurance and Finance sector companies have opened large offices in the area, spurring on the investment, activity and prosperity of Downtown further. This prosperity has been reinforced thanks to over 9000 jobs created in the bioscience and healthcare industries at the Phoenix Biomedical Campus, which is comprised of three leading institutions - the University of Arizona Cancer Centre at Dignity Health St. Joseph, the University of Arizona College of Medicine and the Translational Genomics Research Institute. Christine Mackay, Director at the Phoenix Community and Economic Development Department has said Phoenix “is a true mix of government, financial services, education, technology companies, small business and creatives. It’s a really robust, vibrant, diverse economy in Downtown now”. 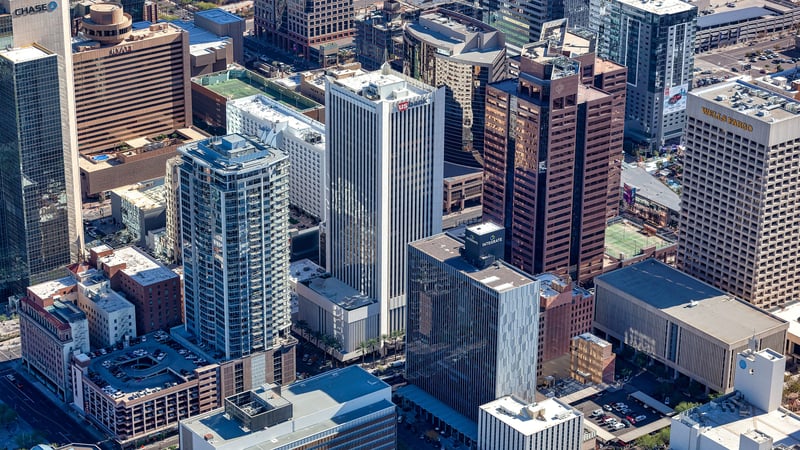 Downtown’s offices have come to be supported by necessary amenities that will draw people to the centre for leisure as well as work. Restaurant numbers have risen from 67 in 2012 to 350 in 2019, and when considered alongside the growth in the hospitality industry as a whole, it shows that Phoenix is catering to increased tourism markets and a more discerning residential base.

Residential real estate has been viewed as a sustainability challenge by the Community and Economic Development Department (CED). To avoid the pitfalls of the 1970s suburban appeal for lower-income workers, the CED has sought to maintain Downtown as a district of affordable housing for workers mainly through high-rise towers. Luxury housing for mid and high-tier income earners and families has been maintained in the suburban areas. Recently, the large home-builder, Lennar, has developed a plot on Loop 303 for easy access to downtown and enough space for detached, family houses. The individuality and easy of access to these properties follows the increased demand thanks to the new offices in downtown. In 2019 the population of Downtown Phoenix stood at 13,500, up 56% since 2015 and forecasted to increase to some 25,000 by 2022.

As the 5th largest city in the United States, Phoenix has the challenge to capitalise on this recent growth whilst also positioning itself as a sustainable city with a clear vision of the future. The CED is championing several policies including the zero-waste initiative, to be carbon-neutral by 2050, a walkable city initiative by shading the sidewalks with trees for the summer months, expanding the city’s light-rail infrastructure to make Downtown and other areas more accessible, and a bicycle master plan. The CED aims to develop Phoenix into its fullest potential and, having achieved so much already in such a short time, the city is on track to accomplish this goal. Balancing the urban vitality with suburban charm, Phoenix is poised to be a leading city in the future for the United States, propped up by a prosperous real estate market as demonstrated by Lennar’s latest development. 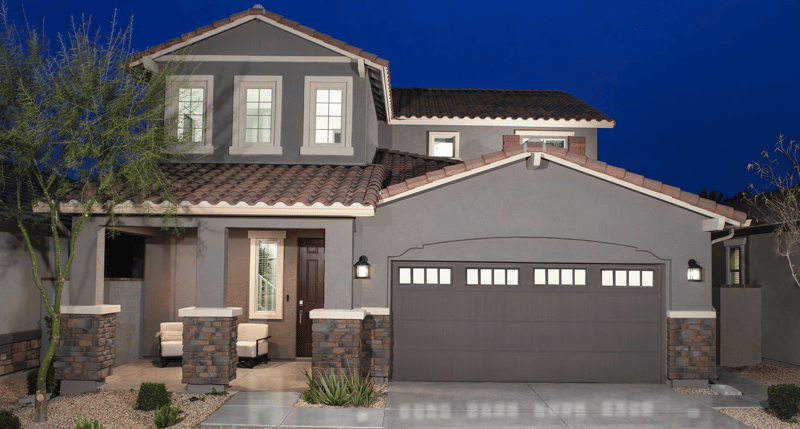 It is clear that Phoenix has built strong economic and real estate foundations with the scope to grow dramatically over the foreseeable future. To be a part of this rapid growth and to maximise your investment, contact Propeterra today. Propeterra is an expert real estate investment advisory for family offices, investors and institutions, ready to help your American dream become a reality.