5 of the Best Hikes Near Phoenix, Arizona

Phoenix is more than the sun, desert sand, backyard swimming pools and professional sports that many attribute to the city. Phoenix is also a city of breathtaking sunsets, uninterrupted mountain vistas as far as the eye can see, quiet lakes and plenty of outdoor adventures. In Phoenix and surrounding Maricopa county, the mountain parks are immensely popular with tourists and locals alike, with South Mountain, the largest municipal park in the United States, a destination for many keen adventurers. Walk remote desert trails, mountain ridges and forested parks in and around Phoenix and take advantage of the beautiful landscape on your doorstep. Check out our list of the 5 essential trails near Phoenix and why not give them a go!

Within the Superstition Wilderness on the southeastern outskirts of the city lies this accessible hike with ancient features. The easy out-and-back loop is suitable for beginners and families with a parking lot at the trailhead, it is one for a leisurely outdoors escapade at the weekend. The popularity of this hike has become apparent in recent years, so consider early mornings or late afternoons as a good time to go to avoid congestion and the hottest of the desert sunshine. The trail is easy to follow and well-marked with one fork where you can choose the easterly path to take the Lost Gold Mine Trail or northwards to explore the Hieroglyphic route. There is almost no elevation gain throughout the trail, making it accessible for all ages and the well-preserved Hohokam petroglyphs give the trail a special, historic feel. The petroglyphs are carvings made by the Native American settlers, the original inhabitants of Phoenix from 1st Century AD to about 1400 AD. Depicting animals, people and geometric shapes, the petroglyphs are a surviving insight into this early civilisation. Visitors are advised not to tough the carvings as natural oils from your skin can damage their preservation. Visit the route in early spring to catch the beautiful wildflower blossoms and water flowing through the canyon to complete a picturesque route.

Ironically named for its tight squeeze between two boulders at one point during the route, this trail is perhaps avoidable for those carrying a few pounds. The boulders and small caves that are littered around the route make this enjoyable for children who can scramble and explore the rock formations, letting their imagination run wild. The National Trail itself is rewarding for its saguaro forest on South Mountain but turn off at the Hidden Valley Junction, about 2 miles in, for rolling terrain and the famous Fat Man’s Pass. Turn right off at the Hidden Valley Junction and venture down a small hill to find the boulders. The higher elevation makes this route breezier at times, which can make it more pleasant in the hot summer months. As always, bring plenty of water and cover your head to avoid sunstroke.

The Camelback Mountain and the Cholla Trail, in particular, are exceptionally popular for their picturesque, Instagram-friendly features. After walking half a mile into the route, hikers are met with a moderate scramble to Cholla Ridge, which separates this route as more challenging than the others listed so far. Watch out for blue dots on boulders that mark the route to avoid veering away from the prescribed trail. As you walk, keep your eyes peeled for the local flora of mesquite, ironwood, palo verde, saguaro cactus and prickly pears. Whilst the popularity of this route has deterred wildlife, look out for rattlesnakes, lizards and cottontail rabbits as well. The hike totals 3 miles to the summit and back with sweeping vistas atop the area’s most iconic natural landmark. 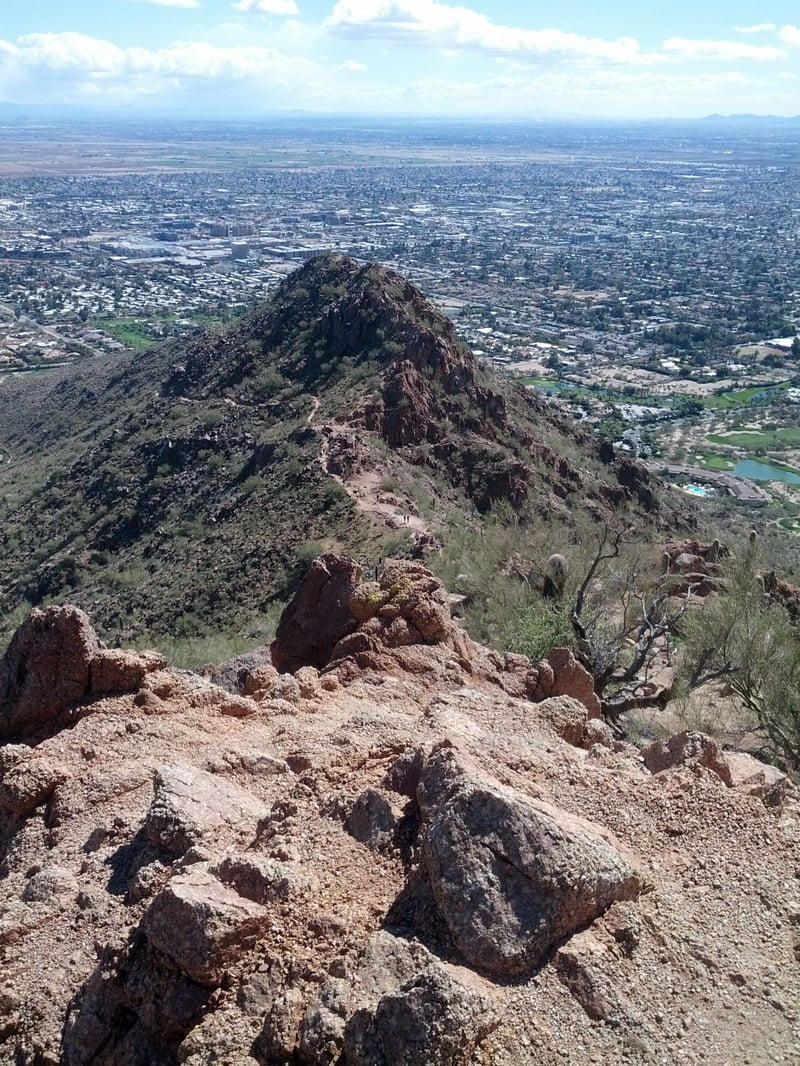 Located in the Lost Dutchman State Park, the 2.4-mile loop hike starts at the base of the Superstition Mountains. This route is moderately difficult given its elevation gain, albeit not steep, the spectacular views of the Sonoran Desert and surrounding landscape start after the first half mile or so of the hike. Despite being moderately difficult, it will still be accessible to many and local families often walk the route with their pets at the weekends. The route winds through an area rich in gold mining history and there is a local tale of the Lost Dutchman’s buried treasure sitting idle somewhere in the hills, waiting to be discovered. The trailhead features good amenities such as washrooms, a picnic area and a water fountain to get you geared up before your walk. Look out for wildflowers in the early spring as this route is blessed with some of the area’s best blossoms during this time of year. Look out for the so-called ‘Green Boulder’ as this marks the summit and the beginning of the spectacular panoramic views. 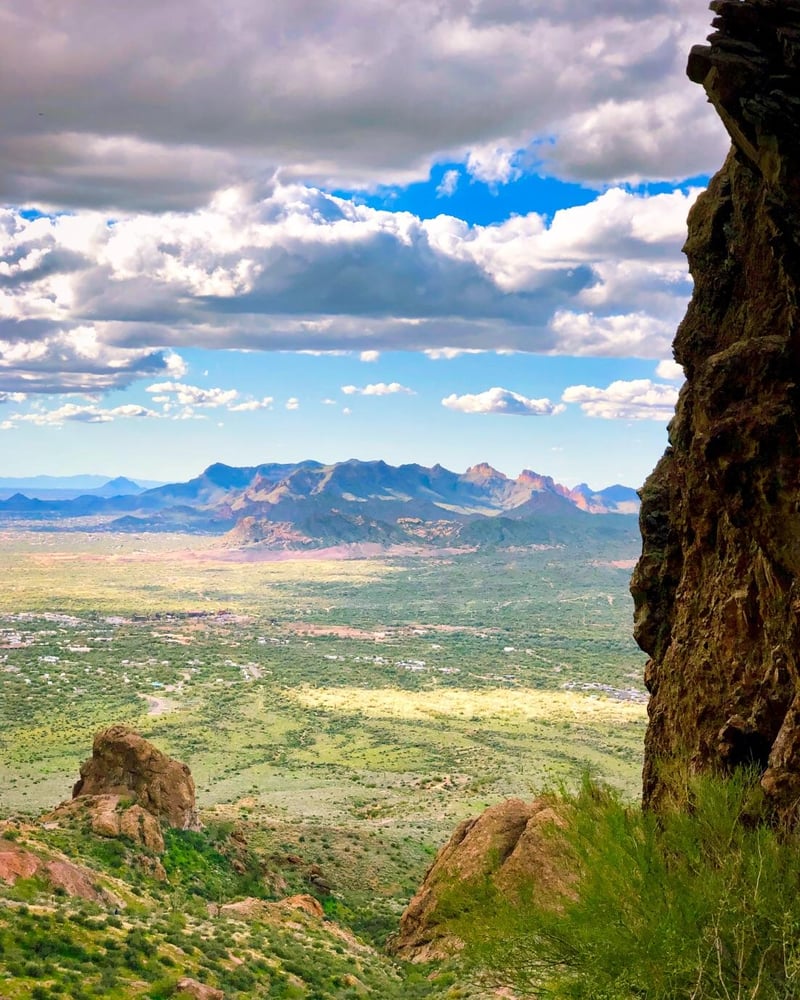 “Warning - Extremely Difficult” reads the signs at the trailhead to this fiendish, demanding route. Rising 1168 feet in elevation from the trailhead to peak in just over 1 mile, the gradient is tough-going for many with stomach-churning steep drop-offs adjacent to the path. Whilst exercising caution is necessary with this route, it remains challenging, rewarding and fun. Used by many locals as their equivalent of Los Angeles’ iconic Mount Hollywood, the route is a popular workout spot and so can often become congested on weekends. Avoid the crowd by going for a sunrise or sunset hike, enjoying the route weaving through small hills and imposing rock formations. The scramble to the summit is well rewarded with 360-degree views of the surrounding landscape including the Phoenix skyline in all its glory. The slight breeze and cooler temperatures will be a relief when reaching the top, especially in the summer months. Remember to always pack water, snacks and, if necessary a torch, to ensure you are safe in some of the area’s most difficult terrain. 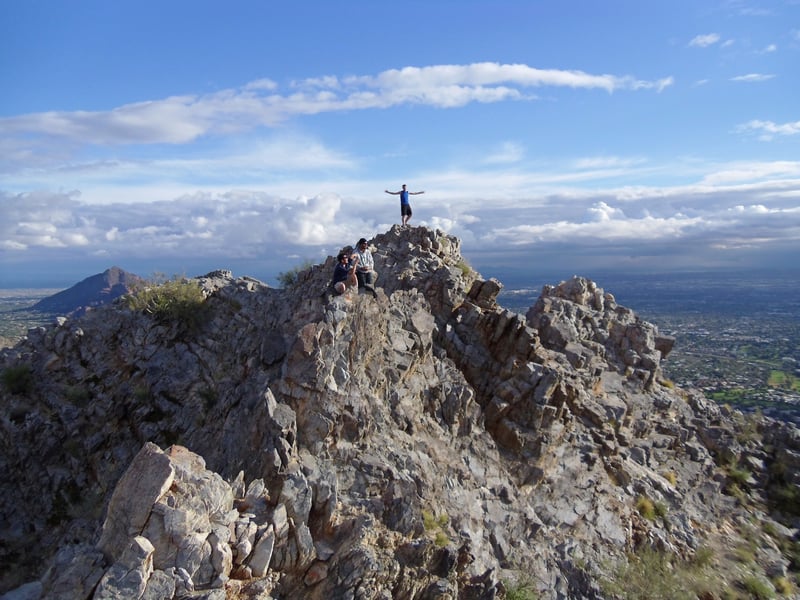 Phoenix is an adventurer, outdoorsy paradise, full of endless exploration in the wild, rugged terrain surrounding the city. Enjoy playing golf on manicured fairways or exploring the National Parks with a backpack and map. Find your adventure in Phoenix with Propeterra. With a selection of fantastic homes to choose from, contact Propeterra today to find your next real estate investment in the Valley of the Sun, Phoenix, Arizona.