Birmingham is a city renowned for its industrial heritage, its miles of canals and its fabulous shopping - but most of all, perhaps, for its fantastic selection of curry houses. But with the ‘Balti Triangle’ attracting over 20,000 visitors a week, and over 100 balti houses in the city, how do you know which to choose? Here’s our guide to some of the best.

Lasan is possibly Birmingham’s most famous restaurant, after featuring on Gordon Ramsay’s ‘The F Word’ in 2010, and appearing in Waitrose’s Good Food Guide and the Sunday Times’ 100 Best UK Restaurants. Situated in Birmingham’s quaint Jewellery Quarter, this is the place to come for swanky cocktails and delicious, creative food.

This Michelin-starred restaurant aims to push the boundaries of Indian cooking with inventive, unusual dishes. The chef, Aktar Islam, previously won the Great British Menu and was the chef at Lasam before this new venture. Don’t miss fine-dining dishes such as Dopiaza Delhi with monkfish, or Sagwaala Odisha with Scottish Highland red deer - and for the more adventurous, why not go for the eight course tasting menu with matching wines?

Not just your usual Indian restaurant, this luxurious venue has won ‘Best Restaurant in the UK’ in the Cobra Good Curry Guide. Decorated with 18th and 19th century Indian artifacts such as carved stone elephants and 300 year old carved wooden doors, the food here lives up to its opulent surroundings - feast on Northern Indian cuisine whilst being served by staff from 5* hotel backgrounds. For a special treat, book out the private dining room which comes with its own bar, library and butler!

This award-winning restaurant is a popular spot for a business lunch or dinner, being situated in Newhall Street, close to Birmingham’s business district. Part of a chain which stretches as far as Dubai, Kuwait and Saudi, it offers luxurious food and the chance to rub shoulders with the stars - previous visitors include Heston Blumenthal, Chris de Burgh and Callum Best. For a real treat, try the President’s Platter, served to the presidents of multiple different countries.

Fancy something a bit off the beaten track? Try Raja Monkey, a take on the traditional Indian street cafe. Decked out like a roadside diner, this restaurant serves up delicious street snacks and dosas as well as more traditional curries. Don’t miss the thali, an entire meal on a plate - a selection of delicious mini dishes accompanied by rice, dhal, bread and raita. 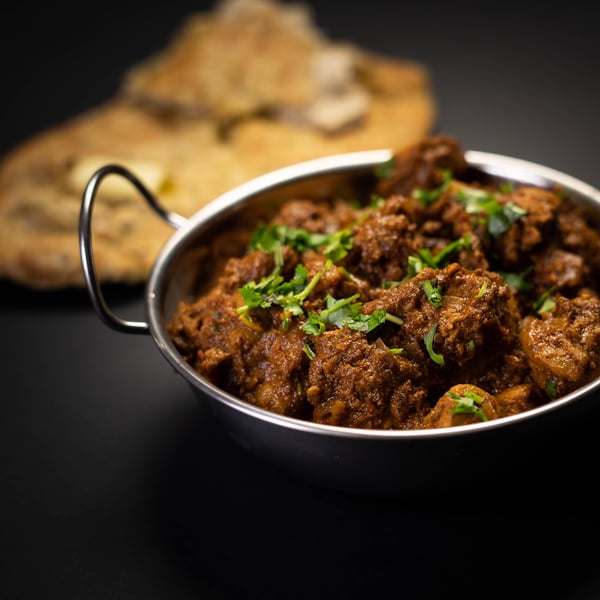 If you fancy a craft beer with your Indian food, there’s no better place to come than the Indian Brewery Company. Tucked away under the railway arches in Snow Hill, this hip joint offers their own delicious beers, such as Indian Summer and Bombay Honey, accompanied by delicious street-food style snacks. Try their Indian fish and chips with masala fries, along with their yoghurt shots and pakora pops.

Yet another award-winner, this restaurant has twice taken the title of ‘Best Indian Restaurant’, won ‘Best Restaurant in the Midlands’ at the National Curry Awards, and has also featured in the ‘Best of Birmingham 2019’. This glitzy spot is a favourite with the English cricket team and offers a five-course tasting menu as well as all the traditional favourites.

Billing itself as a ‘Streatery and Bar’, offering street treats with a twist such as chilli cheese toast and okra fries. This hip joint serves tapas style food to accompany your signature cocktails - and with a dedicated vegan menu and ‘High Chai’ afternoon tea, there’s something for everyone.

This home-style restaurant comes with a host of accolades, from the Diner’s Choice awards to the Midlands Food Drink & Hospitality Awards. Offering delicious traditional cooking at a reasonable price in the leafy suburb of Harbourne, regulars rave about its unparalleled hospitality and fantastic food. Vegans are catered for with a separate menu.

This long-running favourite has been serving Gujarati food since 1977, and is Birmingham’s only vegetarian Indian restaurant. With previous customers including Jamie Oliver and Anthony Worrell-Thompson, this is clearly the place to go for foodies in the know - try their thali plates and follow it up with some traditional sweets from their sweet shop, such as khulfi or rasmalai served with rosewater.