Guide to The Amazing Architecture of Charleston, South Carolina

A National Historic Landmark in the United States, Charleston, South Carolina has played an important role in the country’s history, socially, politically and economically. The city houses over 2800 historic buildings to this day, many of which are preserved by a trust or body who respect the importance of maintaining the city’s history through these landmarks. Charleston has so much to explore, from cobblestone streets to the city’s many churches that give the city its nickname, the ‘Holy City’. The city was founded in 1670 on the west bank of the Ashley River, before migrating to its current location in 1680 where it has remained ever since. With over 340 years of history, the city’s architecture has organically adopted styles and tastes over this period to include Colonial, Georgian, Federal, Neoclassical, Neo-gothic, Italianate, Victorian and Art Deco designs. Check out our guide to some of the historic architecture you can still see in Charleston today.

Best represented by the Old Exchange Building, sometimes known as the Exchange and Provost building, the Colonial-style was popular from 1600 to the mid-1700s before the American Civil War. The style is defined by its multi-pane windows, an emphasis on symmetry in the façades and low relief columns supporting a triangular pediment that carries connotations of Roman and Greek classical architecture. Built between 1767 and 1771, the Old Exchange Building has had a variety of uses in its illustrious history. It has been used as a post office, customs house, covered market, a meeting place and a jail. The building’s main claim to fame is that it was the location of South Carolina State signing the constitution in 1788, thereby holding a special place in American civil history. Today, the building operates as a museum. 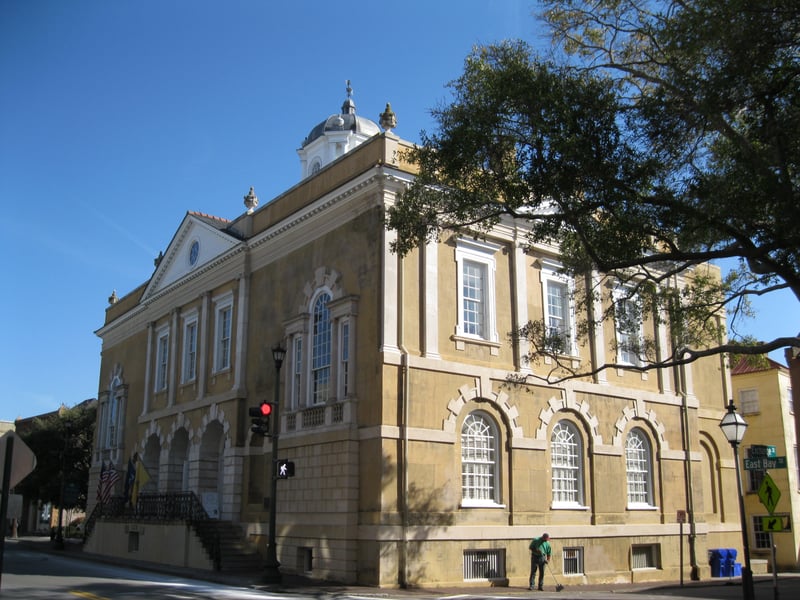 Georgian architecture was immensely popular in Europe during the 18th century, especially within England given its name is derived from the four King George of England who reigned during that century. Epitomised by a square frame and upholding laws of symmetry, the style is both boxy and elegant simultaneously. The Hayward-Washington House in Charleston typifies this style of architecture. Constructed in 1772 as the home of Thomas Hayward Jr., a signatory of the American Declaration of Independence, the house later housed the President, George Washington in May 1791 when he came to visit the city. The house is now preserved as a museum with many of the original features still intact from the 18th century, providing an interesting insight into the lives of Charleston upper-class over 200 years ago. 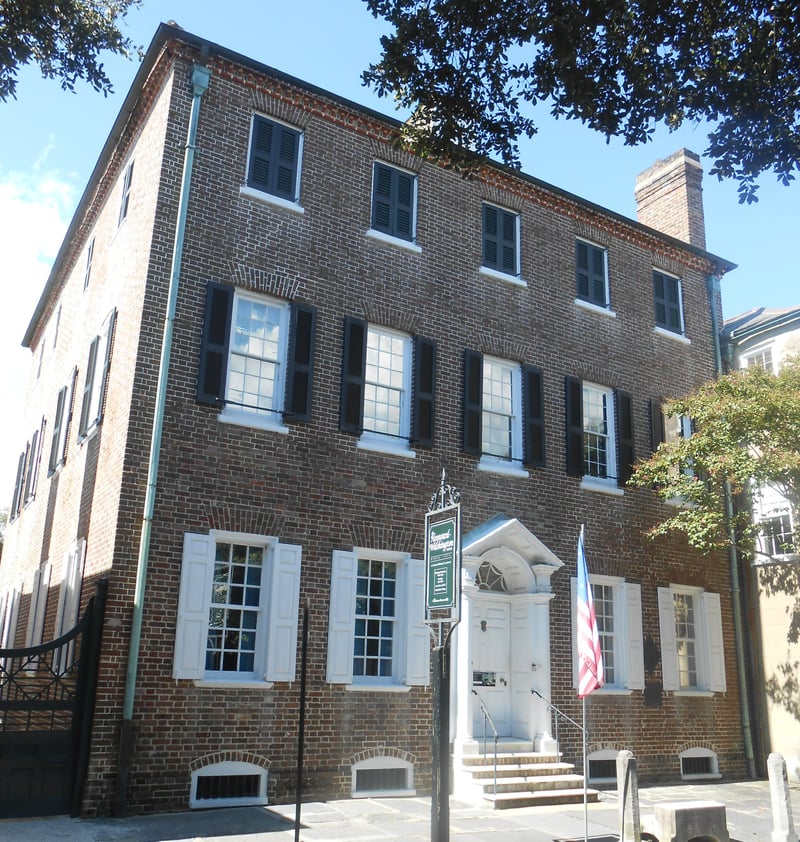 The Fireproof Building typifies the neo-classical with freestanding Doric columns, arched windows, and a statement of apex social hierarchy. Meant to resemble the temples of ancient Mediterranean empires, the style was popular as the US began to establish itself as an independent nation and was often employed by the plantation owners who profiteered from slavery as a way to display their ostentatious wealth. The Fireproof Building is a less decorated form of this architectural language and was built in 1827 to house public records, hence the fitting name, and was designed by influential architect Robert Mills, who also designed the Washington Monument in Washington, D.C. 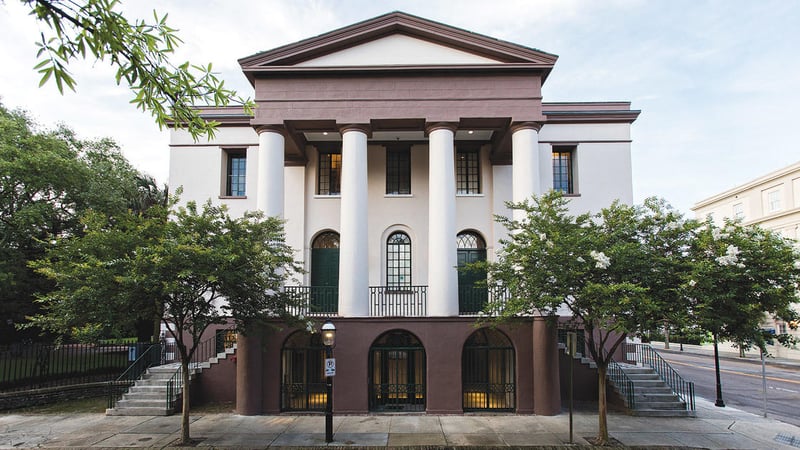 An architectural language that draws inspiration from the European, medieval cathedral style, the neo-gothic is typified by decorative relief, finials, scalloping, pointed windows and arches to create a castle-like structure. The Huguenot Church in Charleston best typifies this style. Located in the French Quarter, the church is the oldest neo-gothic church in the state of South Carolina, built in 1844. It is believed that it was used by the large French refugee population in the city at the time. Today, services are still held in the church following an authentic 18th-century French style but, thankfully for curious visitors, delivered in English.

Emerging at the same time as the neo-gothic style in Charleston, the Italianate is quite different in appearance. It is defined by its use of balconies, balustrades, narrow French double windows, multiple storeys and flat roofs. The Patrick O’Donnell House in Charleston exemplifies this style with great aplomb. Built in 1856, the building later became home to renowned poet and novelist, Joseph Pinckney between 1907 and 1937, from where she started the Charleston Poetry Society. To this day, it remains a private home. 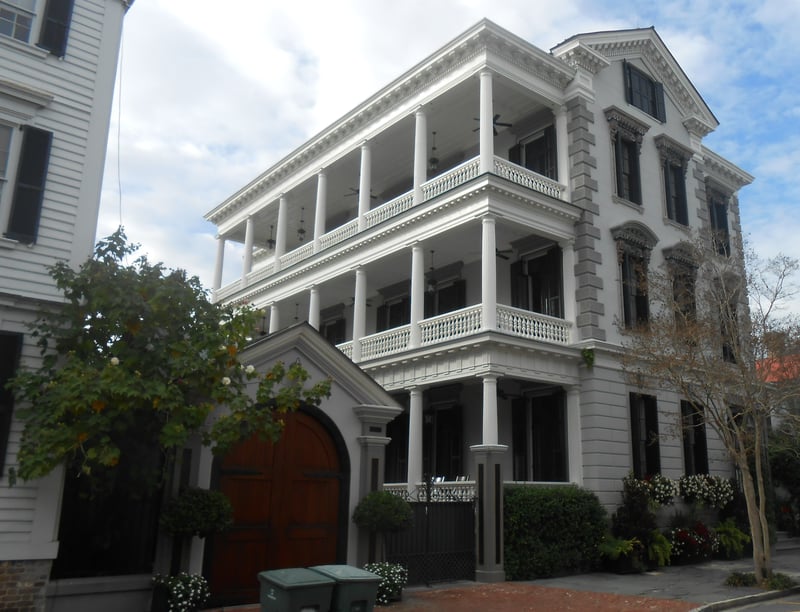 With so much great architecture, the history of Charleston is tangible as you walk its cobbled streets. Get a glimpse back into the past through the city’s wealth of architecture and fabulous museums. Find yourself a piece of this Charleston history with Propeterra. Contact Propeterra today to find out what real estate opportunities are available in Charleston, South Carolina, and make an investment in your family’s future, today.