Salt Lake City has all the necessary components for a hyper-successful city in the coming years. Its technology scene is gaining traction and developing rapidly in and amongst a rejuvenated downtown area, whilst the city is also well located with access to nature escapes. All of these factors have created a city highly desirable to those in the know, those that can see what its potential is now and what it will achieve in the near future. Salt Lake City is ripe for success and its recently revitalised downtown is testament to this.

When one thinks of other major US cities to see a simultaneous tech and prosperity boom over the past 30 years, one would perhaps note San Francisco, Seattle, Portland, Denver and, most recently, Austin. However, Salt Lake City is the next city to receive this seismic appreciation in real estate, attention and lifestyle value. Salt Lake’s up and coming downtown is paving the way for the city thanks to recent developments, new corporate tenants and a young workforce that is eschewing the city’s old-school, conservative image, in favour of a progressive, innovative hub of modern work-life balance. 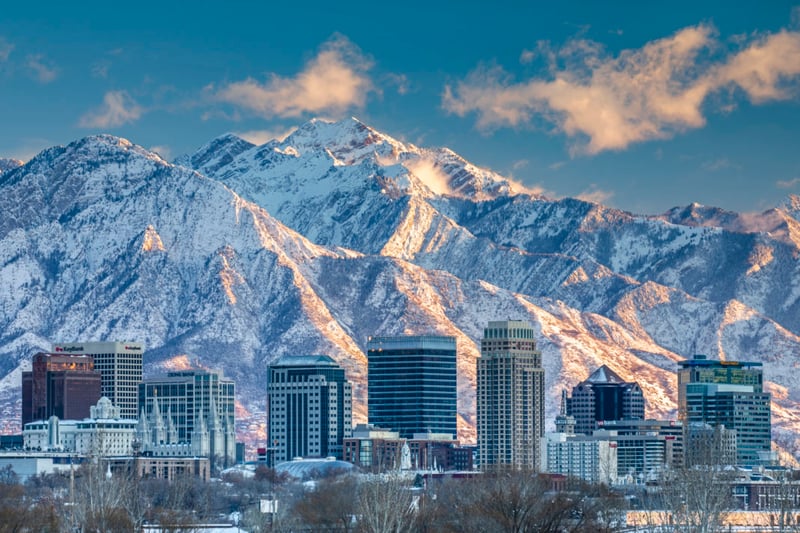 Salt Lake’s downtown attention, the city’s unique grid system, the modern industries supporting the local economy have all contributed to the city being classed as the 3rd best US market for commercial real estate by the Urban Land Institute. The arrival of major, global investment bank, Goldman Sachs, to the city has been a significant factor in its meteoric rise. Establishing themselves in Salt Lake, Goldman Sachs have established their 2nd largest US offices in the city. The arrival of multinational corporation offices to Salt Lake has been particularly prevalent within the technology sector. Nicknamed ‘Silicon Slopes’, Salt Lake has attracted names like Adobe, Twitter and Electronic Arts. The accessibility of the city is being further augmented by the development of a new $3.6 billion airport, with the first phase estimated to be completed in late 2020 or early 2021.

Salt Lake City’s positive attributes and trendy areas have contributed to the city’s 9% population rise over the past 5 years. The Central 9th and Depot Districts have become hotspots for modern metropolitan lifestyles featuring restaurants, coffee shops and breweries. The city’s transport accessibility with its comprehensive public transit system, its proximity to the stunning Utah landscape and Wasatch mountains, a unique quality of life and the employment opportunities have played significant roles in generating more desirability for the city. Over the past decade, residential rental units in downtown have doubled from 5200 in 2010 to 10,000 in 2020.

Whilst rental units downtown have seen dramatic increases, the suburbs have also seen significant growth. As of April 2020, the median home sales price reached $365,000. Data analysis conducted by the University of Utah forecasts that Salt Lake City will see a further 600,000 new residents by 2065. The 50% growth rate will be driven by the increased development downtown, corporate infrastructure, employment opportunities, lifestyle and relative price accessibility compared to other US state capitals.

What was the turning point that saw the development rapidly increase in Salt Lake City? Thanks to the city’s conservative history and Christian religious institutions, during the 2007-2009 recession, development was seen as a social good by these institutional investors. The Church of Jesus Christ of Latter Day Saints had already broken ground on the, indispensable and catalyst, City Creek Centre. The mixed-use, retail-dominant complex covers 20 acres and was completed for a cost of $1.5 billion in the city’s prominent Main Street location. This has proven a statement of intent from the city and her people to push Salt Lake further than it had gone before, to augment its brand beyond the confines of Utah state. In 2016, the 111 Main Street Office Tower opened to house Goldman Sachs and the Eccles Theatre, a performing arts centre that serves as the focal point of the city’s culture.

Thanks to the developments and factors involved, Salt Lake City has become a dining destination for high-end, creative restaurants, corporate spaces that repurpose the city’s historical architecture and plenty of entertainment opportunities. Although the downtown expansion and industry development has been slower on the uptake than other major US cities, the effects will have the same result. Salt Lake City is on the cusp of becoming a breakthrough prospect with high-priced real estate both residential and commercial. To explore your real estate investment opportunities in Salt Lake City, Utah or to find your dream home, contact Propeterra today. Propeterra, your global real estate advisory.